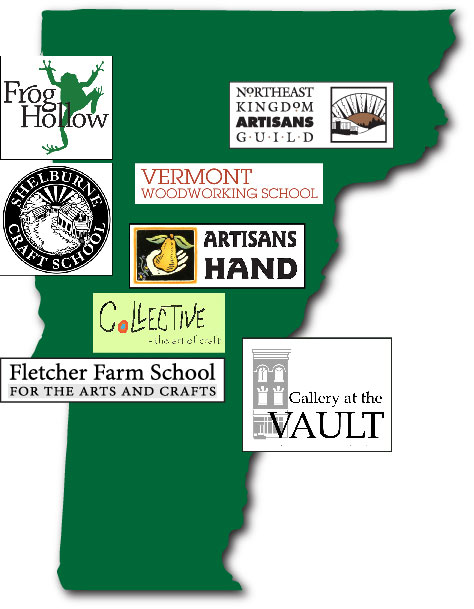 The Vermont State Craft Center program began in 1993 and has evolved considerably since its inception. The program references the (much longer) history and heritage of craft in Vermont, which dates back to the early 20th century. (For more information on the history of craft in Vermont, visit the State of Craft website.)

In 1993, at the invitation of Governor Howard Dean and the Vermont Arts Council, representatives of Vermont’s crafts community came together to design a program promoting craft throughout Vermont. An Executive Order, signed on June 16, 1993, created an Overview Commission  to administer an official State Craft Center designation process to recognize high-quality craft centers and tie them back to the Vermont brand through official designation.

In 2005, a subcommittee of the Overview Commission explored ways to revise the Executive Order to make the State designation more accessible and of greater benefit to the crafts community.

Taking that group’s input, Governor James Douglas signed an Executive Order the following year to revise the existing designation process. The Overview Commission now empowered Vermont craftspeople (elected by the crafts community) as a Standards Group of representatives to review all applications for designation, putting the evaluation authority in the hands of the crafts community itself, rather than policymakers in Montpelier.
The Standards Group worked together for over a year to redesign the application and jury process. Applications for designation under these new parameters were first accepted in 2008.

In October 2012, Governor Peter Shumlin signed a reconstituted Executive Order No.12-12, which is the current policy detailing the roles and responsibilities of the Overview Commission and the Standards Group.

The Overview Commission and the Standards Group have cultivated a robust network of Vermont crafts organizations, businesses and partners that join with the State of Vermont to promote, encourage and support excellence and success in Vermont craft. This has fostered an appreciation of the significant contributions of the Vermont crafts community to the economic and cultural vibrancy of our state.

Although funds are currently limited, the State of Vermont is committed to collaborating with the crafts community to spotlight Vermont State Craft Centers. The Chief Marketing Office of the State of Vermont, together with the Vermont Department of Tourism and Marketing within the Agency of Commerce and Community Development, are actively engaged in promoting Vermont craftspeople statewide, along with increasing visits to the Vermont State Craft Centers.

Both high-quality galleries and craft education centers may apply for designation, including for-profit and not-for-profit organizations. The network of Vermont State Craft Centers has power in numbers and can collaborate in joint marketing strategies that benefit all.